New book: The Empire Air Training Scheme and why my wife knew more than I did about it. 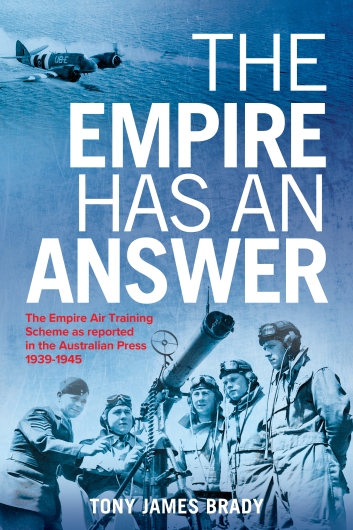 The Empire has an Answer

The Empire Air Training Scheme in the Australian Press 1939-1945

Firstly, a lesson on how husbands get into trouble. I’d forgotten that one of the key characters in my wife’s fictional Belleville trilogy does his bit for king and country as a pilot in the RAF, having first trained via the Empire Air Training Scheme.

To make amends, see the separate post – Foray into Fiction for the sake of domestic harmony – my wife has a lot of loyal women readers so you might want to pass this along to the women in your life. To cut a long story short, that’s how she knew more about the training scheme than I did. But I should have remembered ….. LOL

Under the Australian Empire Air Training Agreement (EATS), seven-ninths of Australia’s aircrew contribution were fully trained in Australia, with the balance finishing their training in either Canada or Rhodesia (now Zimbabwe).

In fact, there were a total of 37,576 aircrew trained under the program which ended in March 1945.

Churchill acknowledged the contribution the scheme had made to the Allies air superiority and eventual victory.

What we understand through this book is the strength of the ties that Australia (and other countries) felt as part of the British Empire.

The air training scheme, highly ambitious for its time, was needed to counter German air superiority and Britain’s lack of preparedness for war.

This book contributes significantly to our understanding of this little known and largely forgotten episode in Australian military history.

As a footnote, I’m impressed by the extensive end notes and the impressive newspaper bibliography which runs to nearly 100 pages in total.