Abandoned and Sacrificed – The tragedy of the Montevideo Maru

This is truly the forgotten story of a tragic event which was denied and ignored for decades by successive Australian governments.

The sinking of the Japanese requisitioned freighter, Montevideo Maru, by the US submarine Sturgeon, in 1942 resulted in the deaths of 1053 Australian civilians and Lark Force troops. 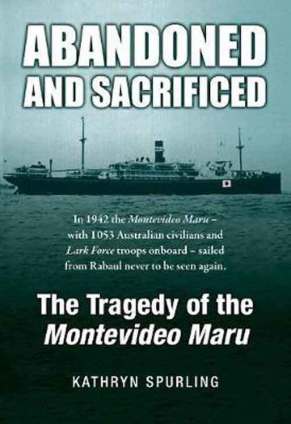 The Lark Force was raised in March 1941 and sent to Rabaul, New Britain to defend its strategically important harbour and airfield.

Unfortunately they were young, inexperienced, poorly equipped and untrained for the conditions and were inevitably overwhelmed by a superior Japanese force.

Families in Australia were not informed of the tragedy that had befallen Rabaul and what followed was decades of official denial and subterfuge.

Kathryn Spurling does not hold back with her criticism of Australian Prime Ministers, particularly Robert Menzies who indicated that the matter should not be pursued because it might endanger trade with Japan.

Spurling had been approached to write this book by the Montevideo Association, but in doing so, to focus on the families and loved ones whose lives were impacted by the event.