Courage in the Skies traces the story of Qantas in World War II, particularly in regard to the war with Japan.

With the RAAF undermanned and unprepared for a war in our region (Australia had already handed over our newly acquired Sunderland Flying Boats to Britain), Qantas was called upon to provide reconnaissance aircraft in the form of their Empire flying boats for surveillance duties around the Australian coastline. 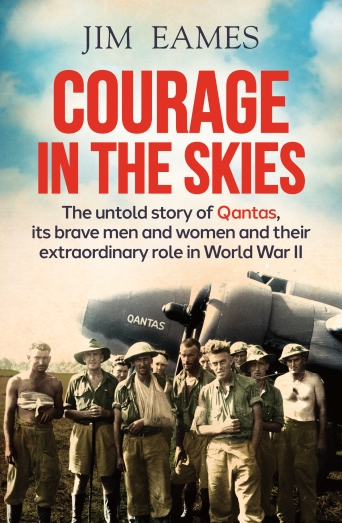 In an attempt to redress the situation, the Australian Government arranged for the purchase of 19 Catalina flying boats from the United States in 1941. Qantas was prevailed upon to provide experienced aircrew to fly the aircraft back to Australia but none had ever piloted a Catalina. Eames graphically describes the trip and the difficulties they encountered.

Once war broke out with Japan, Qantas was heavily involved in evacuating Australian military personnel and civilians from Java and Singapore, running shuttle flights to Broome. One of these flights carried the AIF Commander, General Gordon Bennett, following his controversial escape from Singapore.

However, Qantas did not emerge unscathed from these high risk shuttle runs. Two Empire flying boats were shot down resulting in extensive loss of life. Qantas also suffered losses later in the war when operating search and rescue missions in New Guinea.