The Hero Maker: Biography of the Dambusters writer 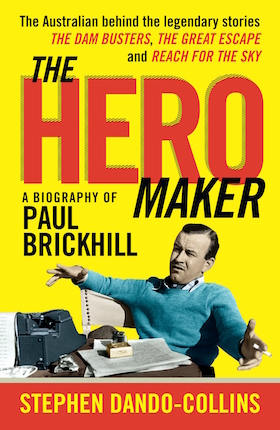 The Hero Maker: A biography of Paul Brickhill
The Australian behind the legendary stories The Dam Busters, The Great Escape and Reach for the Sky

I think it is fair to say that Paul Brickhill’s name is not as well known as the stories he penned, among them The Dam Busters, The Great Escape and Reach for the Sky: The story of Douglas Bader.

Yet this remarkable Australian writer should be better known when you consider the movies that emerged from his books have endured across the generations.

Who knew that he was the highest-earning author in the UK of the period?

Yet life for the enigmatic Brickhill was complicated. He was beset with mental-health issues and his marriage to model Margot Slater was tempestuous. He struggled with alcohol and writer’s block too, as his success – and all that accompanied it – threatened to overwhelm him.

In The Hero Maker, award-winning historical author and biographer Stephen Dando-Collins exposes the contradictions of one of Australia’s most successful, but troubled, writers.

Brickhill’s extraordinary story – from the youth with a debilitating stutter to Sydney Sun journalist to Spitfire pilot and POW to feted author – explodes vividly to life on the centenary of his birth.

In fact the story of his life seems the equal in many ways of the blockbusters he created.