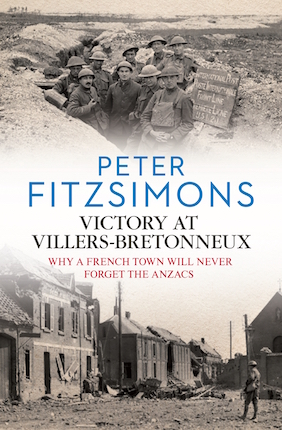 After four brutal years, the fate of the Great War hangs in the balance. With the Bolsheviks in power in Russia, German attentions could be transferred to the Western Front. But with America about to enter the war, the Germans realise that their only hope is striking at the Allied lines first.

On the morning of 21 March 1918, the Kaiserschlacht, the Kaiser’s battle, is launched.

Across a 45-mile front, no fewer than two million German soldiers hurl themselves at the Allied lines, with the intention of splitting the British and French forces, and driving all the way through to the town of Villers-Bretonneux.

For nigh on two weeks, the plan works brilliantly. The Germans are able to advance without check. In desperation, the British commander, General Douglas Haig, calls upon the Australian soldiers to stop the German advance and save Villers-Bretonneux. If the Australians can hold this, the very gate to Amiens, then the Germans will not win the war.

The Australians are indeed able to hold off the Germans, launching a vicious counterattack that forces the Germans back the first time.

Victory at Villers-Bretonneux is the final instalment of Peter Fitzsimons’ Great War trilogy. This book, like those before it, is a substantial yet easy read.