Stern Justice: Australia and its war crime trials in the Pacific 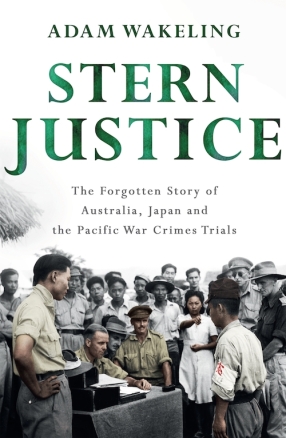 The forgotten story of Australia, Japan and the Pacific War Crimes Trials

Readers may remember Adam Wakeling’s previous book ‘The Last Fifty Miles’, recounting Australia’s critical role in one of the most decisive victories of World War One.

With his law background, he has now turned his attention to the war crimes trials in the Pacific theatre where Australia and its allies prosecuted Japanese soldiers for the atrocities they committed. Australia conducted hundreds of trials throughout the Asia-Pacific region. The most tenacious of the Allied prosecutors, Australia led the unsuccessful bid to prosecute Emperor Hirohito as a war criminal and was the last country to conduct war crimes trials against the Japanese, on Manus Island in 1951.

In the immediate post-war period, public sentiment in Australia against the Japanese was such that leniency was roundly condemned, despite debates at the time that the bombing of Japanese cities had robbed the Allies of the moral authority to put their enemies on trial.
Seventy years on, it’s likely that few Australians are aware of the Australian program of trials, despite their scale, and few would know that the Australian Army executed 138 of the 949 suspects they tried at 294 trials.

The last execution by Australia occurred on 10 June 1951 at Manus Island, a place much in the news now for very different reasons.

The Japanese soldiers, in mounting their defence, felt they were simply following orders but the extent of their brutality and culpability lies in the grim statistics of 27 per cent of Allied prisoners dying in Japanese captivity compared with 4 per cent of those held by the Germans and the Italians. A sobering account of the aftermath of war.