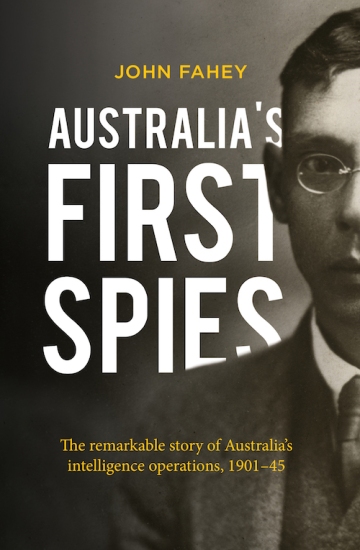 John Fahey was well placed to take on the task of writing about Australia’s intelligence operations – he worked at DSD for eight years and saw service in both the British and Australian armies. He chose to cover the period up to 1945, having undertaken not to write about any matters he had access to in his working life.

His aim is to provide the specialist reader with a well-researched history of Australia’s early intelligence operations and the general reader with an accessible narrative account that is more reliable than the ‘public pronouncements and posturing of politicians ….’. He tells the stories of dedicated patriots who undertook dangerous operations to protect their new nation, despite a lack of training and support.

He shows how the early adoption of advanced radio technology by Australia contributed to the war effort in Europe. He also exposes the bureaucratic mismanagement in World War II that cost lives, and the leaks that compromised Australia’s standing with its wartime allies.

The book has won high praise from none other than Professor David Horner who says it is a ‘… warning tale that emphasises that Australia needs to put its own interests first …. And that intelligence work requires hard-headed professionals …. backed by an informed and responsible government.’

I was struck by the petty rivalry between various organisations that could not rise above their disagreements to put the interests of the nation first. For anyone interested in the intelligence game, this is a ‘must read’ book.