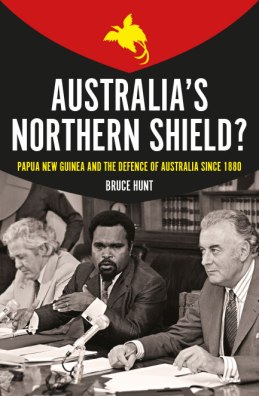 Papua New Guinea and the Defence of Australia since 1880

The defence of Australia and the role of Papua New Guinea in any such action has been a question that has confronted Australian governments since the commencement of the First World War.

At this time Germany controlled north eastern New Guinea while Britain and Australia controlled the south east portion of the island.

Following the Treaty of Versailles, Australia was mandated control over the former German New guinea.

The lead up to the Second World War saw Australian Governments place much greater emphasis on the ‘northern Shield’ theory because of rising tensions with Japan.

This was subsequently acted on after the Japanese invasion of New Guinea during World War II.

After the fall of Indonesia’s President Sukarno, Hunt writes that Australia no longer regarded PNG as a northern defence shield.

Access to recently released Cabinet discussions between 1950 and 1975, the year of PNG independence, has allowed Hunt to understand the thinking of successive Australian government on the future of PNG.

This makes for fascinating reading, particularly the thoughts of former head of the Country Party and Deputy Prime Minister John McEwen.

Bruce Hunt has produced an invaluable record of Australia’s strategic interest in PNG.