The Silent Soldiers of Naours – Messages from beneath the Somme

By Donna and Michael Feichtner, Gilles Prileaux and Matthieu Beuvin

Naours is a pretty little French village located a few miles from Vignacourt, the town where the photographic plates which formed the basis of the “Lost Diggers” photos were discovered. Vignacourt was used as a staging area for troops moving up to and back from the Somme battlefields and many Australia troops took the opportunity to visit the famous caves at Naours. 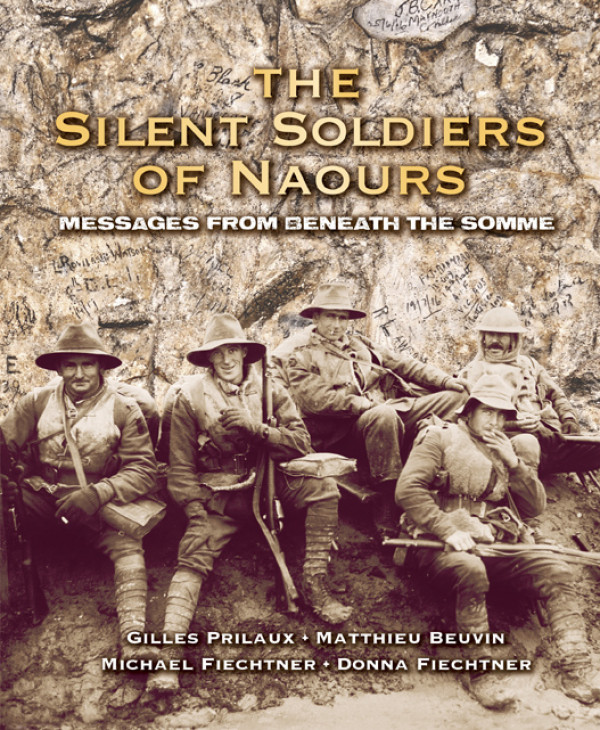 These medieval limestone caves were first used by local villages as a safe haven from marauding armies during the Middle Ages. They created an underground city comprising a labyrinth of tunnels with hundreds of individual chambers. Sealed off and forgotten, they were rediscovered at the end of the 19th Century and soon became a major tourist attraction.

But it was only after the discovery of the “Lost Diggers” collection that Giles Prileaux was alerted to the fact that an incredible collection of graffiti and inscriptions of nearly 3000 WW1 soldiers existed on the walls of the nearby Naours caves.

In a painstaking process, Australian authors Donna and Michael Feichtner and French archaeologists Gilles Prileaux and Matthieu Beuvin have matched signatures with the names and biographies of 46 of the Australian soldiers. Of the 46, 14 subsequently died on the battlefield while some were wounded in action and repatriated to Australia.

This beautifully illustrated book is a fitting memory to those who went to fight in a far-away land.