A ‘must do’ tour in Darwin 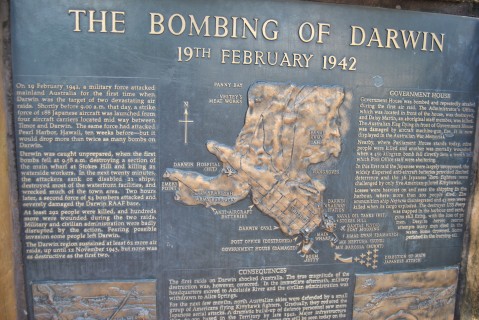 The Administrator’s house in Darwin

American Jeep in the Museum

I was recently in Darwin for a defence conference so I took the time out to do a 4-hour Bombing of Darwin tour one morning.

You can link here for details of the tour – http://www.bombingofdarwin.com.au – but be aware that it does not run in the ‘wet’ – the hot steamy months of summer, except around the anniversary of the bombing of Darwin in February.

The tour was very interesting. It’s led by Garry Gallagher whose an affable, likeable character with knockabout charm and who happily entertains his small tour groups with anecdotes and stories of the time when World War II really came to the Australian mainland.

During the tour, he pointed out the key locations where little evidence remains today of the damage inflicted on this small northern outpost of Australia. There were significant casualties but the impact was played down in the press of the day, probably for fear of scaring the general population but there would also have been a reluctance to let the enemy know how successful they had been.

I did not know, for instance, of the Scot John Gordon who betrayed Australia. He was found signalling to the Japanese from his bush camp on the other side of Darwin harbour.

Through his tour, Garry has met people with first hand experience of Darwin and the bombing and that has enhanced his understanding of the events. Much of this information has found its way into his book, ‘A Nice Day for Flying’ which can be purchased via his website. There are some interesting photos in the book too.

This book does not have an index nor does it have a bibliography that might point to the primary sources he’s referenced, although he does acknowledge them throughout the book.

But combined with Garry’s commentary throughout the tour, the book is a handy ‘aide memoir’ to his rapid fire anecdotes and observations about a time in our near past when Darwin bore the brunt of the enemy’s well coordinated and well planned attacks in World War II.