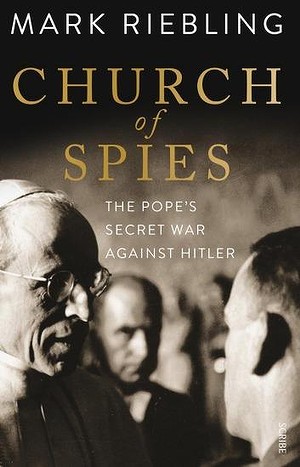 This book is described as a radical reinterpretation of the wartime Pope Pius XII, who is perhaps the most vilified and detested Pope in modern history. The book has also been described by one reviewer as ‘simply the finest work on the subject in print’. High praise indeed! See the links to extended reviews published in other media at the bottom of this blog post.

Pius XII and the Vatican are thought to have appeased Hitler and betrayed international Jewry by staying silent during the Holocaust. The accusation is seen in many quarters as fundamentally damaging to the Catholic Church’s moral standing, earning Pius XII the nickname ‘Hitler’s Pope’.

But this accepted narrative of a spiritual leader prepared to look the other way when confronted by Nazi atrocities is not the complete story. In Church of Spies, Mark Riebling uses recently uncovered documents to redraw the conventional image of the wartime Pope, who, in his account, was not Hitler’s lackey, but an active anti-Nazi spymaster, encouraged to refrain from making public statements against Hitler and the Nazis to allay the fears of German Catholics who were actively working against Hitler.

In this book, Riebling shows that the Church’s wartime campaign against Hitler was far more extensive than ever thought — and that many actions were intended to undermine the Nazi regime, and were approved by Pius XII himself.

There is a very detailed review in the Catholic press, which is worth reading for those interested in the topic. I’ve provided links here: