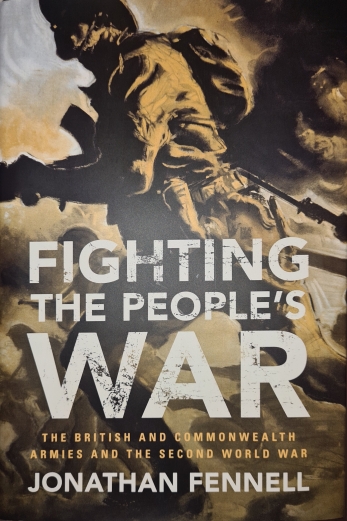 The British and Commonwealth Armies and the Second World War

This book, described variously as a ‘panoramic history’ and ‘an engrossing book that should cause scholars to rethink their approach to the study of Britain and the Commonwealth countries in World War II’ (David Horner, Australian Book Review, May 2020) has won, among its many accolades, the Duke of Wellington Medal for Military History in 2020.

Remarkably, when this book was mooted, there had been no single-volume history of the British and Commonwealth Armies in World War II.

Compared with the First World War, Fennell reveals there was far less enthusiasm for enlisting in the various Commonwealth armies in World War II with similar experiences of sluggish recruitment in Australia, Canada, India, New Zealand and South Africa, where there were varying degrees of loyalty to the notion of empire. Unemployment, brought on by the Great Depression, was a greater driver of recruitment than loyalty to an outdated concept.

The chronology of the war and its key battles and pivot points plus the strategic context provide the backbone for this excellent book which, time and again, refocuses on the morale of the fighting troops and the miscalculation of leaders such as Winston Churchill who ‘… fundamentally undervalued and misunderstood the central aspiration of his citizen soldiers …’. It was ‘… certainty of employment …’ not a fundamental belief in the need to defeat Nazi Germany or Imperial Japan that was uppermost in soldiers’ minds.

Other reviewers have been full of praise. Here is a small sample of opinions:

‘[A] weighty, admirably uncomfortable account [by] an impressively diligent and thoughtful young historian … This is a fascinating and important book, which brings together a mass of information … never before assembled under one roof.’Max Hastings Source: The Sunday Times

With doubt, this is a book that will find its way onto the shelves of most military history enthusiasts.