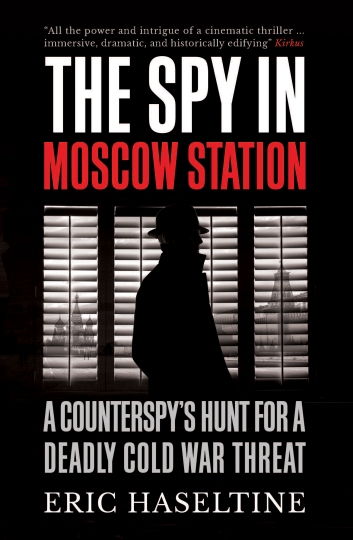 The Spy in Moscow Station

A Counterspy’s Hunt for a Deadly Cold War Threat

Author Eric Haseltine is better known for his books based on his neuroscience interests. On his website – http://www.drhaseltine.com – he lists these specialities: Futurist, Author, Neuroscientist, Intelligence Officer.

He was an unusual, some might say courageous, appointment to the US National Security Agency (NSA) when he was hired in March 1999 by then director General Michael V Hayden USAf (retd) to shake up the NSA’s Research Directorate. He was lured to the job from Walt Disney Imagineering, a somewhat unlikely source for an intelligence appointment.

But this book is not about his time at the NSA, rather it is about earlier events and other places, beginning with the CIA Station in Moscow in March 1978.

It was Gandy himself who made the greatest contribution to Haseltine’s retelling of this story.

At the centre of the surveillance was the IBM Selectric III typewriter, a typewriter in common usage, often referred to as the ‘golf ball’ typewriter.

An office machine so mundane that, when it was shipped to the Embassy in Moscow, no one thought anything of the security risk of sending it via normal freight, rather than via diplomatic bag, giving the KGB the opportunity to divert the machines for modification.

What Gandy revealed was an amazing electronic engineering feat that is sure to engage technical specialists who understand more about electronics than I do.

What is sure is that, by their modifications, the KGB pulled off a breathtakingly thorough penetration of U.S. national security which may have cost US spy assets in Russia their lives.

Chilling too is the distrust among the various US national security agencies.

When this all became public, the State Department and the CIA played down the potential impact of the Russian success in intercepting messages from the US Embassy in Moscow, denying there was any real threat to national security.

The book also carries a stark warning for the present: like the State and CIA officers who were certain their ‘sweeps’ could detect any threat in Moscow, Haseltine believes that, given recent events, America, rather than retaliate when faced with Russian interference, would descend into recriminations, finger-pointing and bitter political disputes that might, in fact, be Russia’s desired outcome.

This book is definitely recommended reading for anyone interested in the ‘cat and mouse’ game which is international espionage and the tradecraft at the centre of this high stakes game.