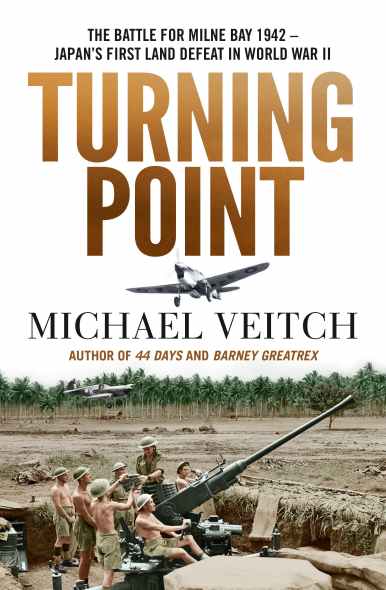 It was Milne Bay, writes Michael Veitch, that was to draw the curtain “on a series of disasters that had befallen the Allied forces in Malaya, Rabaul, Timor, Ambon and Singapore …” representing, as it did, the first land defeat of Imperial Japan in World War 2.

Fought over just ten days in the spring of 1942, the battle was to become a defining moment in the war in the Pacific, helping to stem the Japanese advance to Port Moresby.

Situated on the extreme eastern point of the vast island of Papua, Milne Bay is enclosed on both sides by the steep, thickly wooded slopes of the Owen Stanley Range’s far eastern tip. It is far from idyllic.

To counter the expected Japanese attack, US engineers had carved out a secret airstrip but it was Australian troops, with support from RAAF Kittyhawk squadrons (75 and 76), who finally stopped the Japanese in their tracks.

Veitch has succeeded in bringing to life the story of a little known but decisive battle, with its mix of tragedy and heroism against a determined enemy.