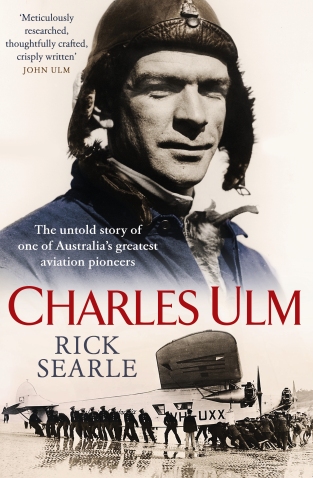 This book is a divergence from the normal military history fare on this blog but one well worth reading if you are an aviation tragic.

Charles Ulm is the least known of Australia’s aviation pioneers, overshadowed by the charismatic Charles Kingsford Smith who was the ultimate aviation adventurer.

Together, in 1929, they famously did the seemingly impossible, flying the 11,950 kilometre route across the Pacific from America to Australia in the Southern Cross in 83 hours and 50 minutes, an achievement likened by Searle to the first moon landing 40 years later.

Ulm, however, was more of an entrepreneur than an adventurer. He was able to recognize the growing importance of aviation services within Australia and as a means of connecting Australia to the far-flung world beyond, whereas Kingsford Smith was the swashbuckling flier with little taste for the boardroom.

Yet, despite their differences in temperament and outlook, they set up Australian National Airways in late 1928. Smithy was the face of the airline; Ulm was in his element as managing director. Smithy had the charisma and public acclaim, Ulm the tenacity and organisational skills.

It must have irked Ulm that, in 1932, Kingsford Smith received a knighthood for his services to flying while Ulm did not.

Yet Ulm’s vision would in time lead to a parting of the ways with his famous partner. Eventually separating from Kingsford Smith, Ulm persevered. He had exchanged his financial interest in the famous Southern Cross aircraft for Smith’s shares in ANA. The enterprise was at first successful, but a catastrophic crash and the increasing bite of the Great Depression forced it into bankruptcy in 1933.

Desperate to drum up support for a new airline, Ulm’s final flight was meant to demonstrate the potential for a regular trans-Pacific passenger service. Somewhere between San Francisco and Hawaii his plane, Stella Australis, disappeared. No trace of the plane or crew was ever found.

Rick Searle, in this fascinating biography, demonstrates that, while Ulm lacked Smithy’s prowess as an aviator, he was his superior as a visionary, and a driving force behind the growth of modern global air travel. It’s true to say his untimely death robbed Australia of a huge talent.

As a footnote, it’s interesting to note that Charles Ulm enlisted in the AIF as a 15-year-old by giving a false name and claiming to be 19 years old. He saw action at Gallipoli where he was wounded. He later enlisted under his real name and was injured again. These are little known facts of his early life, but what an extraordinary life it was.

This biography reminds us of how much we owe to those people who were willing to push the envelope. It’s a thoroughly entertaining read.