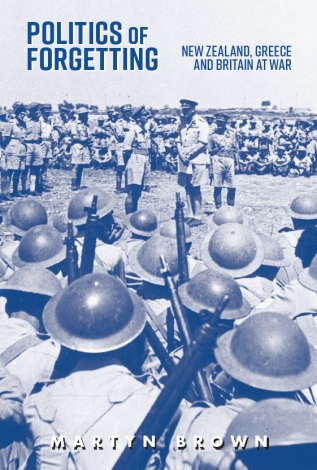 Politics of Forgetting
New Zealand, Greece and Britain at War

First, some context. This book seeks to examine New Zealand’s military engagement in Greece and Crete in World War II, the political environment in which its military became involved, and the subsequent official remembrance by New Zealand historians of that engagement, its challenges and its consequences.

As Martyn Brown writes, ‘New Zealand clearly had a more complex wartime interconnection with Greece than what is celebrated in official memory.’ He concedes though that ‘…. Diplomatic interest in a democratic Greece are at one end of a spectrum of obscurity.’

At the time, Greece was a poor country in turmoil. A military dictatorship was followed by invasion and occupation by Germany and its allies. New Zealand, along with Australian and British troops, entered this arena.

New Zealanders outnumbered Australians in the makeup of the ANZAC forces defending Greece.

According to Brown, New Zealand official state memory is selective in how it records New Zealand’s involvement, emphasizing some things and ignoring the unpalatable. It also conceals its assertiveness with Britain over the latter’s Greek policies.

Brown concedes that official memory-making of war requires ‘moral simplicity’, which is what he seeks to demonstrate in this book.