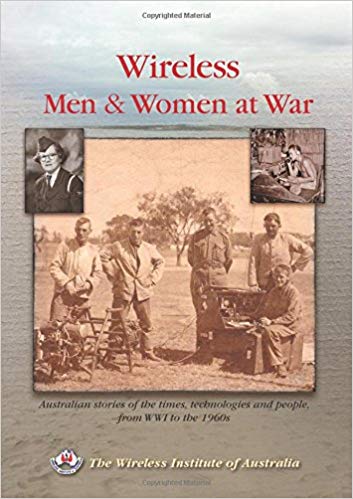 Australian stories of the times, technologies and people, from WWI to the 1960s

Published by The Wireless Institute of Australia
ISBN 9780995445000
RRP $35.00 in paperback
Available on Amazon.com or from the Institute website LINK HERE

Wireless Men and Women at War brings together in one collection the stories of the times, technologies and people, from WW1 to the 1960s.

In 2014, the WIA board decided to help raise awareness of the 100th anniversary of Australia’s involvement in World War I. This plan was then widened to include the Australian radio amateurs who served their country during all wars, culminating in a call for submissions. Articles not otherwise published in the organisation’s magazine form the basis of this publication, which honours the radio amateurs who performed great public service in times of need.

The publication is divided into five sections : World War I; Between the Wars; World War II; The modern Era; Epilogue.

Of special interest will be the stories of the early pioneers of amateur radio, including Walter Hannam, who was the first secretary of the Wireless Institute when it was established in 1910. He served in the ANZAC Wireless Coy in World War I, which was the forerunner to the Australian Army Signal Corps.

There are many such stories of people who were keen amateurs and who then went on to use this knowledge in wartime.

There is also an interesting article on the role of amateur radio operators in the UK during World War II as part of the Radio Security Service (RSS). Over 1,500 radio amateurs were used for radio intercept work. They were tasked with listening on designated frequencies, looking for enemy agents that may have landed in the UK. The author of this article David Pilley explains in some detail the extent of wireless operations in the European theatre.

For anyone interested in signals intelligence in wartime, and amateur radio and its early iterations in particular, I’m sure this book will be of great interest.