Arnhem: The battle for the bridges, 1944 – New book by Antony Beevor 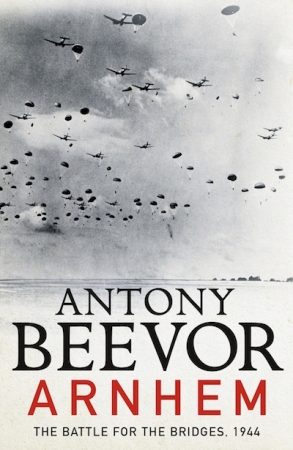 Arnhem: The battle for the bridges, 1944

Older readers may be familiar with this story via the Hollywood blockbuster movie ‘A Bridge Too Far’. It’s a tale of ego and subsequent failure by the Allies and in particular, British Field Marshal Bernard Montgomery.

After the successful Normandy landings, the German army was in full retreat, but Montgomery and the Allied Commander Dwight Eisenhower had different ideas on how next to proceed.

Against the advice of his own general, George Patton, Eisenhower acceded to Montgomery’s plan, code named Operation Market Garden.

The plan was to enter Germany via Holland by seizing the several bridges between Wesel and Arnhem, crossing the Rhine and thus taking Berlin before Christmas 1944. British, American, Polish and Canadian airborne troops were to be parachuted/glidered in to capture the bridges and Allied armoured corps would then follow to relieve/support the paratroopers and push into Berlin.

Because of shortening daylight hours, the airborne attack was spread over three days and the drop zones were a considerable distance from the bridges, thus giving the German forces ample time to readjust their defences.

Additionally there was only one suitable narrow road, dubbed ‘Hell’s Highway’ for the tanks to use and the Germans quickly organised attacks for both sides, in addition to blowing up the key bridge crossings.

The operation was a shambles. Beevor expertly captures the confusion and despair of the Allied troops in the field. Another classic from Antony Beevor.