To Paint a War: New book explores the lives of the Australian artists who painted the Great War 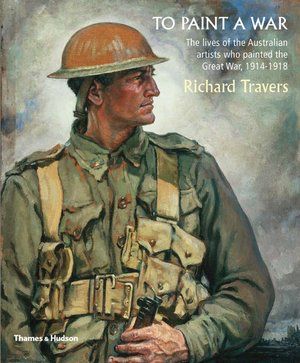 Before 1914 Australian artists were drawn to England and France to prove to their critics their art was worthy of consideration outside Australia.

The men of the Heidelberg School, their wives and lovers enjoyed a bohemian existence on the fringes of the London art world.

At the outbreak of the war most were too old or medically unfit to enlist. Eager to ‘do their bit’ Tom Roberts, George Coates and Arthur Streeton served as wardsmen at a London hospital.

In the early years, the British War Office severely limited access to the front for artists and photographers but eventually attitudes changed.

In May 1917, following Canada’s lead, the Australian War Records Section was formed. Their initial brief was to collect all the written records of the Australian Army. This was later extended to include photographs and war relics.

The first artists arrived in France in September 1917. Travers weaves the history of war, the development of art in the fledging Australian nation and the stories of artists themselves into an engrossing and very readable book. – Kylie Leonard