Rallying the troops: a World War I commemoration 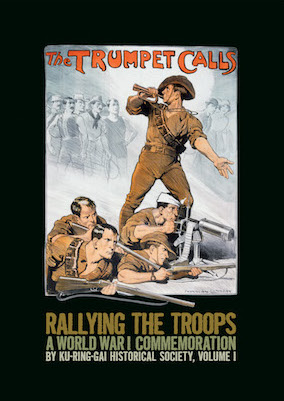 On turning the cover, this first of four volumes in a series presents the reader with a powerful image.

It is a close-up of a field of bright poppies, and the reader’s eyes are drawn to a solitary poppy in a sea of red. In the prime of its youth, above the others, it stands ready to face the day and what it may bring. And that day, like the humans covered in this marvellous volume, did bring something: unprecedented carnage, now symbolised by the poppies of Belgium and France, among those who answered the call to arms in 1914.

The Ku-ring-gai Historical Society is a band of community historians from northern Sydney. In this series, they have set out to commemorate their neighbourhood’s contribution to World War I. Dedicated to both those who deployed – many never to return – and those who shouldered some of their burdens back home, this first volume examines how prospective soldiers from their area were rallied to enlist in the Australian Imperial Force.

Volume 1 contains data on almost 530 out of 1750 troops now identified (including at least 24 female nurses) who went to war – an impressive figure from a shire population of only 12,000 at the time. Of these, over 260 perished overseas; 130 were decorated for their service. Today, it is generally held that virtually everyone who made it home was a casualty in one way or the other.

Volume 1 was released to coincide with the centenary of the start of the Great War. It comprises five sections, with six support appendices and a first-rate index. It covers the early years of the war, with biographical entries for those whose family names start with A to F. Follow-on volumes progressively will include the remainder, including those discovered as late as the final volume.

The first four sections provide concise information on life in the pre-war era; memorials (both in Australia and on the battlefields); the historian C. E. W. Bean and the vital role he played; and the early campaigns (German New Guinea, Gallipoli). These sections are written by different contributors and are highly illustrated, well-written and suit both the novice reader and serious researcher alike. A glossary allows the reader to easily understand the acronyms. Follow-on volumes address subsequent periods of the war.

The most remarkable section in this book is the fifth – covering those who enlisted from the Ku-ring-gai area.  Each soldier’s story follows a consistent format. Their military service and next-of-kin are followed by their life story, including location and date of death, and where each is commemorated. The devotion by those who have painstakingly compiled these data is compellingly obvious, with the result a record of a community’s contribution to war that is probably second to none, especially on this scale and at this level of detail. Where one exists, photographs of the service personnel are included.

Technically, the book is a first-class product. Photographs are clear, and the layout bears the hallmark of a designer and a publisher who know how to communicate visually with the reader. Footnotes enable deeper enquiry.

Volume 1 of Rallying the Troops is an incisive and deeply personable publication; even today most Australians can relate to the collective hurt and commitment of this community.

The full set of four volumes should provide a remarkable collection that will deserve a place, not only in every household in Ku-ring-gai, but in all repositories of literary art across the nation. As a community group-effort, this work is a standard setter.

This book can be purchased from the Society’s website at www.khs.org.au