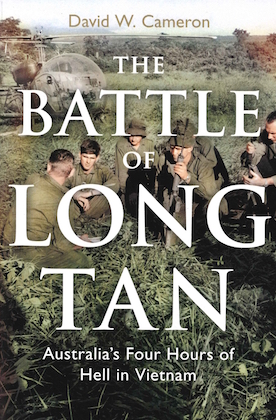 The Battle of Long Tan
Australia’s four hours of hell in Vietnam
By David W. Cameron

After the 1 Australian Task Force base at Nui Dat was shelled by Viet Cong mortar, artillery and recoilless rifle fire in the early hours of 17 August 1966, battalion headquarters despatched various companies to search for the enemy mortar crews.

Major Harry Smith and his D Company of 108 men were directed to conduct a three-day patrol which Smith felt had little prospect of achieving anything except cause his men to miss the Little Pattie/Col Joye concert at the base.

What followed on that fateful day of 18 August was anything but routine. David Cameron recounts in great detail, the events for that day. When Smith and his men entered the Long Tan rubber plantation, little did they know that battalions of the 275 VC Regiment were also entering on the eastern edge, intent on preparing for an ambush on an Australian patrol.

At 4.10pm, a group of Viet Cong soldiers walked into the right flank of Delta Company. In the ensuing fight, D Company defied a four hour three sided attack by a force of 2,500 Viet Cong and North Vietnamese troops until they were joined by a relief company of infantry in armoured personnel carriers.

In the aftermath of the battle, 17 Australian soldiers lay dead. Of the 24 who were wounded, one died later in hospital. Enemy casualties were higher. 245 lay dead but later figures put the number at nearer 500.

This battle of course has been much in the news of late. Harry Smith wrote his own account entitled Long Tan: The start of a lifelong battle mentioned in this blog in April.