44 Days: 75 Squadron and the fight for Australia 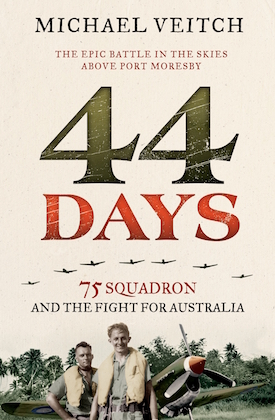 Michael Veitch’s previous books include the critically acclaimed accounts of Australian pilots in World War II, HEROES OF THE SKIES, FLY, and FLAK.

This latest book, according to an interview he gave to The Daily Review, was suggested by the son of a pilot in the RAAF 75 Squadron who came up to chat to him after he had given a talk at an RSL club. Veitch knew of the air battle over Port Moresby, but only vaguely. The pilot’s son, Peter Tucker, the son of Arthur Tucker, suggested he write a book on the episode and later presented Veitch with a box of cassette tapes of Arthur talking about his war experiences.

These raw source materials were augmented by Veitch’s discovery of a sound archive at the Australian War Memorial in Canberra that held the accounts of 75 Squadron pilots that had been recorded in the 1980s, allowing him to quote from men who were long dead.

In March and April 1942, RAAF 75 Squadron bravely defended Port Moresby for 44 days when Australia truly stood alone against the Japanese. This group of raw young recruits scrambled ceaselessly in their Kittyhawk fighters to an extraordinary and heroic battle.

The recruits had almost nothing going for them against the Japanese war machine, except for one extraordinary leader named John Jackson, a balding, tubby Queenslander – at 35 possibly the oldest fighter pilot in the world – who said little, led from the front, and who had absolutely no sense of physical fear.

Time and time again this brave group were hurled into battle, against all odds and logic, and succeeded in mauling a far superior enemy – whilst also fighting against the air force hierarchy. After relentless attack, the squadron was almost wiped out by the time relief came, having succeeded in their mission – but also paying a terrible price.

I couldn’t help but notice that one of the pilots who volunteered to remain while others were evacuated as the Japanese fleet headed towards Port Moresby was my namesake Peter Masters. Digressing completely, I’m relieved to know he survived the war and actually, in 1998, wrote his autobiography Born Lucky.  He was the first Australian CEO of the Chrysler Corporation and later Chairman of the Board of the Duke of Edinburgh Awards in South Australia.

Back to 44 Days: This is a book for all those whose passion is military aviation and especially for RAAF stories. No doubt the earlier Michael Veitch books are already on your bookshelf. This one should join them shortly.

For more detailed interviews with Michael Veitch about 44 Days: