Australia and the Great War: new book challenges the myth-making 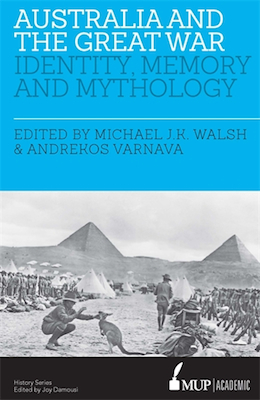 This book is published as part of MUP Academic’s History Series. A casual glance at MUP’s website – link here – reveals the quality of the publishing undertaken at this august institution, not just in the History series but across a range of topics.

This collection of essays emerged from a conference entitled The British Empire and the Great War: Colonial Societies and Cultural Responses (20 -22 February 2014) held at the Nanyang Technological University, Singapore.

Put simply the authors tackle the thorny issue of the development of Gallipoli and ANZAC mythology in Australia that brands any challenge to it unpatriotic and unAustralian. They use the example of SBS sports journalist Scott McIntrye being sacked for what SBS management, and no doubt the public at large, deemed to be ‘inappropriate’ and ‘disrespectful’ comments contained in a series of Tweets on ANZAC Day 2015.

Walsh and Varnava write that Professor Philip Dwyer of the University of Newcastle wrote ‘a stout defence of McIntrye, premised on two fundamental pillars; that he was not entirely inaccurate, and, that in a country that has freedom of speech as a core value, he had every right to say what he pleased as long as he did not break any laws.’

I smiled too at this statement:

‘Frustratingly, public discourse within Australia has not evolved in line with these developments in the international scholarly literature. Popular histories, with little basis in archival research or the wider literature, continue to flood the bookshelves.’

I think it’s fair to say I’ve seen quite a few of these books come across my desk for review.

Brett Holman, in chapter 5, writes about The Enemy at the Gates: The 1918 Mystery Aeroplane Panic in Australia and New Zealand. In this essay, he writes about Australia’s and New Zealand’s ability to ‘manufacture’ a war, and especially the development of anti-German feeling. My own grandfather, already married with six children, was pressed into service as a test of loyalty because of his German name, although he went to great lengths to prove he was a Swiss national.

This is a book of thought-provoking essays.

Respected historian Peter Stanley, quoted in the first essay, believes that we ‘ought to question our assumption that there is something so important about the Great War that a hundred years on people ought to be thinking about it’.

This collection explores the immediate and long-term consequence of war, looking in particular at identity, history, gender, propaganda and nationalism. It is certainly worth reading.