Monash: The soldier who shaped Australia 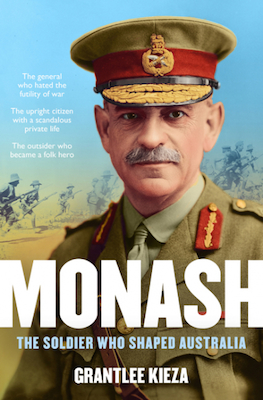 This is one of four books published on John Monash this year. It is a new ‘big biography’ that goes well beyond his military career, although that aspect of his life is well documented in the book.

Tim Fischer, himself the author a book about Monash, has written a review of Kieza’s book for The Courier-Mail, where Kieza works as a journalist. His verdict: ‘This book does great justice to the military career of Monash, from private to general.’

I smiled at Fischer’s assessment of Monash’s preoccupation with recording all aspects of his life, describing him as a man ‘silly enough to keep very personal diaries and write down every encounter with the fairer sex in and around Melbourne during his bachelor years’.

By the standards of the day, his love life was, to put it mildly, unconventional.

No doubt, though, the extent of the primary source material has been a great benefit to his biographers.

Grantlee Kieza was interviewed on the Victorian ABC Radio program Mornings with Jonathon Kendall about the book; the interview is really worth listening to – this is the link to the program:

Monash established himself as a major force, not just on the bloody fields of wartime Europe but also in post-war society, where he oversaw vital developments in making Australia into a modern nation. When he died, an astonishing 300,000 Australians attended John Monash’s funeral in Melbourne.

In this book, which, for its size, is very well priced a $39.99 for a 714pp hardcover, Kieza successfully explores the character of this unconventional man and what drove him to his incredible achievements and, ultimately, his unlikely folk hero status..