New book from Cambridge: The Search for Tactical Success in Vietnam 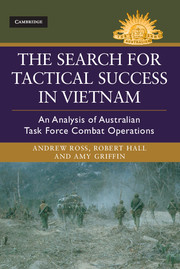 As the authors write in the introduction to this book:

“Counter-insurgency shows no sign of diminishing as a form of warfare ….. while insurgents use armed struggle and terrorism to further their political ends, combat will remain a prominent feature of counter-insurgency. The nature of combat in counter-insurgency also remains largely unchanged since Vietnam, especially for the insurgents. The military impact of the insurgent still rests primarily on the extensive use of light weapons and land mines. Insurgents still seek to immerse themselves in the civilian population ….”

Clearly, for future military leaders for which this book is largely written, knowledge of past campaigns can inform the present.

From 1966 to 1971 the First Australian Task Force was part of the counterinsurgency campaign in South Vietnam. Though considered a small component of the Free World effort in the war, these troops from Australia and New Zealand were in fact the best trained and prepared for counterinsurgency warfare. However, until now, their achievements have been largely overlooked by military historians.

The Search for Tactical Success in Vietnam sheds new light on this campaign by examining the thousands of small-scale battles that the First Australian Task Force was engaged in. The book draws on statistical, spatial and temporal analysis, as well as primary data, to present a unique study of the tactics and achievements of the First Australian Task Force in Phuoc Tuy Province, South Vietnam. Original maps throughout the text help to illustrate how the Task Force’s tactics were employed.

This book, no doubt, will become required reading for those with career ambitions in the ADF.