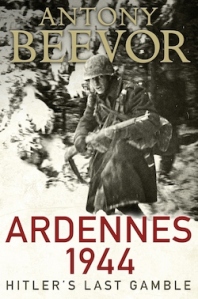 Yesterday, Judy and I went to see Antony Beevor at the Brisbane Writers Festival. He was speaking about his latest book ‘Ardennes 1944: Hitler’s Last Gamble’.

Beevor, of course, is a highly regarded historian specializing in World War 2 (the European theatre, I should add).

His insights into the campaign, the subject of his latest book, were not surprising: ‘Terrain is always important,’ he said, ‘but it was particularly important in the Ardennes’. Then there was the intense cold, it was midwinter and the area was heavily forested.

Hitler, he said, examined maps to determine the plan for the campaign; he did not examine the physical areas. There is, he says, an element of megalomania about all dictators.

Thus, on 16 December 1944, Hitler launched his ‘last gamble’ in the snow-covered forests and gorges of the Ardennes. With more than a million men involved, it became the greatest battle of the war in western Europe. The Allies, taken by surprise, found themselves fighting two panzer armies.  Belgian civilians abandoned their home, justifiably afraid of German revenge.  Panic spread even to Paris.  While many American soldiers fled or surrendered, others held on heroically, creating breakwaters which slowed the German advance. The Ardennes was the battle which finally broke the back of the Wehrmacht.

Beevor talked frankly about his research in the Russian archives during Glasnost – now, he would be arrested if he returned to Russia, he said, where he faces 5 years in prison.

An hour passes very quickly in such a session. And it is the tidbits he leaves his audience with that are the most memorable.

He spoke briefly about the terrible ‘moral choice’ in war and reflecting on contemporary conflicts, he needed to say nothing more than that ‘intellectual honesty is the first casualty of moral outrage’.

He left his audience wanting more.