New book: Australia’s war and reconstruction in the 1940s; loved the cover 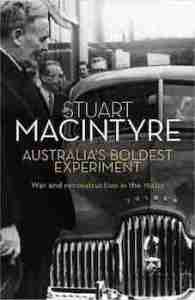 Australia’s Boldest Experiment: War and Reconstruction in the 1940s
By Stuart Macintyre

How could I, born the same year as the Holden, resist a book with the first Holden on the cover.

In this new book, Stuart Macintyre explains how a country traumatised by World War I, hammered by the Depression and overstretched by World War II became a prosperous, successful and growing society by the 1950s. An extraordinary group of individuals, notably John Curtin, Ben Chifley, Nugget Coombs, John Dedman and Robert Menzies, re-made the country, planning its reconstruction against a background of wartime sacrifice and austerity.

Not surprisingly he says that improvements came to be taken for granted, their origin forgotten. I can’t help feeling that we see that today, with more and more expected of government.

Macintyre is well qualified for the task having co-edited the two volume Cambridge History of Australia and winning, with his co-writer Anna Clark, the 2004 NSW Premier’s Australian History Prize for The History Wars.

Writing in The Australian (6-7 June 2015) Professor Ross Fitzgerald said ‘this book makes a singular contribution to our nation’s political and economic history’ – high praise indeed from someone eminently qualified to say so.