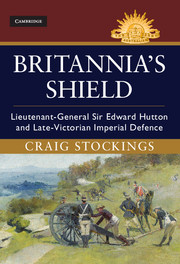 To anyone who is familiar with Australian military history writing, the name Craig Stockings will resonate. He is an Associate Professor of History at the University of New South Wales, Canberra with a formidable list of credits.

He has published a history of the army cadet movement in Australia entitled: The Torch and the Sword (2007), a study of the First Libyan Campaign in North Africa 1940–41: Bardia: Myth, Reality and the Heirs of Anzac (2009), and a re-interpretation of the German invasion of Greece in 1941 entitled: Swastika over the Acropolis (2013; with Dr Eleanor Hancock). He has also edited Zombie Myths of Australian Military History (2010), Anzac’s Dirty Dozen: 12 Myths of Australian Military History (2012) and Before the Anzac Dawn (2013; with Dr John Connor).

In this latest book he uses the study of the military career of LTGEN Sir Edward ‘Curley’ Hutton as a means by which to shed light on late-Victorian thinking on the ‘land’ defence of the British Empire and the embryonic structures of imperial defence during the period. It was this imperial military cooperation that saw the empire rally around Britain in World War 1.

The book attempts to make sense of the failures, false starts and successes that eventually led to more than 850,000 men being despatched from the Dominions to buttress Britain’s Great War effort – an enormous achievement for intra-empire military cooperation.

As always with Cambridge publications, this is a fine volume that will look good gracing your bookshelves.