Cooking and Aviation: an unlikely pairing in publishing 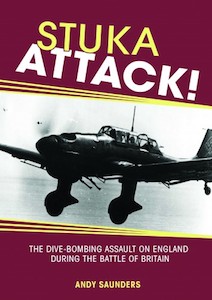 I was browsing through my shelf of review books this afternoon and I noticed this book:

The book came to me via local distributor Capricorn Link – the publisher is UK-based. Over the years, I’ve seen many books via this route, most notably Osprey books. I’d imagine it’s only good bookstores that stock such titles locally.

The author of this book, Andy Saunders, whose specialist area of interest is the air war over Europe, 1939-1945, has seven titles in the Grub Street catalogue. He is the editor of Britain at War magazine – http://www.britainatwar.com – (there’s another diversion for you).

In this book, Andy Saunders takes a critical look at every operation by Junkers 87 Stuka (dive-bombing) aircraft against British targets in 1940.

There are stats too. For example, Appendix III lists RAF Fighter Command claims for JU87s July-December 1940.

I recognized quite a number of the titles on Grub Street – I’ve seen many of them over the years – so if wartime aviation is your passion, I think you’ll want to have a look at the site to see what you might be missing out on.