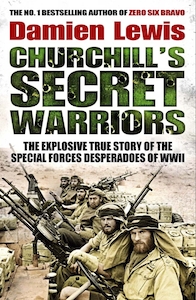 I think the name Damien Lewis will be familiar to many readers. He has spent twenty years reporting from war, disaster and conflict zones around the world. He has written a dozen non-fiction and fiction books, topping bestseller lists worldwide, and is published in some thirty languages. Two of his books are being made into feature films.

In his latest book, he explores the story of the development of a completely new kind of warfare, demanded by Churchill – the first ‘deniable’ secret operatives whose task was to strike behind enemy lines. Those who volunteered for service were offered nothing but the potential for glory and all-but-certain death.

In Churchill’s Secret Warriors he tells the story of the daring victories for this small force of ‘freelance pirates’, undertaking devastatingly effective missions against the Nazis, often dressed in enemy uniforms and with enemy kit, breaking all previously held rules of warfare.

Lewis brings the adventures of the secret unit to life, weaving together the stories of the soldiers’ brotherhood in this compelling narrative, from the unit’s earliest missions to the death of their leader just weeks before the end of the war.