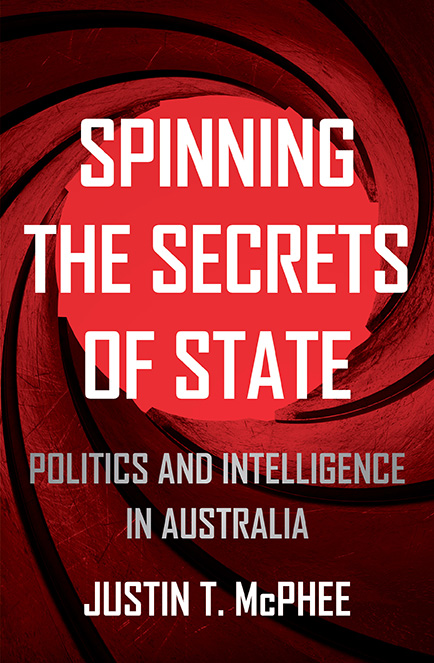 Spinning the Secrets of State

Politics and Intelligence in Australia

Author Justin McPhee begins this book with a quote from a speech John Howard delivered to the Lowy Institute on the tenth anniversary of the Iraq War, describing the ‘eternal dilemma’ of the nature of intelligence assessments from ‘varying, incomplete and sometimes contradictory sources … [which] never produce evidence beyond a reasonable doubt’, a departure from his government’s confidence in the intelligence assessment of the presence of weapons of mass destruction in Iraq.

However, some of the most notorious cases of misuse of the intelligence services occurred under the prime ministership of Billy Hughes (Prime Minister between 1915-1923).

He examines too the rise of the New Guard in NSW in 1932 and their efforts to undermine, and perhaps overthrow, the government of Jack Lang.

McPhee laments the lack of accountability of how politicians use the intelligence provided to them by intelligence agencies.

He writes that ‘given all of the evidence presented so far’, the politicisation of intelligence in Australia is a trend that can be expected to continue, describing it as ‘a powerful tool that political leaders can employ to promote their policy choices.’

To find out more, listen to this interview with Justin McPhee on Radio National, 2/9/20, by Philip Adams. Click on the link below: