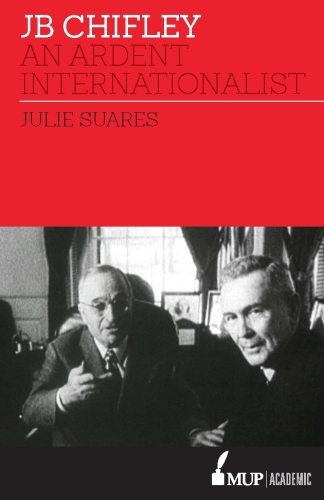 J B Chifley
An Ardent Internationalist

When I looked at Julie Suares’ biography – among other things, she has been a shearers’ cook, farm hand and library technician – I couldn’t help but reflect that the former labourer and train driver turned Prime Minister Ben Chifley would have approved of Suares as a chronicler of his achievements.

His early life was tough; his education limited. He was truly a self-educated man.

Repeatedly throughout this book we see Chifley taking every opportunity to expand his understanding of economics, international affairs and Australia’s immediate neighbourhood of Asia-Pacific.

He believed that diplomacy should trump war in resolving disputes. His response to Percy Spender’s accusation that the Chifley government had ignored the dangers posed by the Malayan emergency, for example, shows how advanced his thinking was: he accepted that ‘Asian nationalist aspirations were based on a desire for independence from European colonial rule and improved living standards.’

He understood the old colonial order was ending. He was a great admirer of the Indian Prime Minister, Jawaharlal Nehru who shared his views on the need to adjust to a changing post-colonial world.

Like other reviewers, I am left wondering where we might find a leader of his like today. Where might we find an original thinker prepared to prosecute an Australian foreign policy with a distinctly Australian perspective and with an understanding that regional cooperation and respect should be cornerstones of our interactions? Our modern world cries out for such a leader.